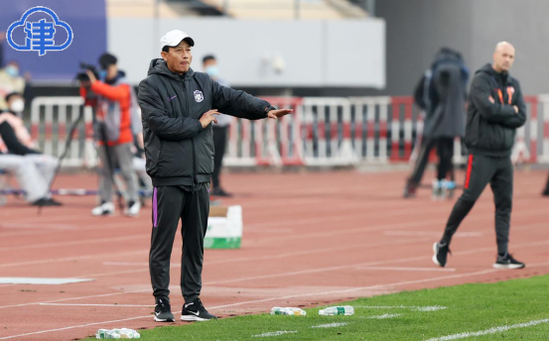 As the first team confirmed to enter the relegation group, TEDA was the first to complete the relegation task "unexpectedly". Of course, this is inseparable from the efforts of everyone on the team, and as the leader of the team, head coach Wang Baoshan is definitely the one who paid the most. When the thrilling relegation battle has gone, TEDA also has the task of competing for the top 10 in the league, as well as a "little" idea about the FA Cup.

In an exclusive interview with Jinyun reporter, Wang Baoshan admitted that leading the team to complete relegation was the most difficult time in his coaching career. The TEDA team can have a reborn performance because of unity and desire. In the face of the outside world's definition of TEDA's elimination of Shenzhen as an upset, Wang Baoshan once again showed a humorous side, responding with the word "not approved". In addition, after TEDA completed the task of relegation, Wang Baoshan made it clear that he was also full of expectations for the Football Association Cup.

Wang Baoshan: It can be said that it is because the special competition system is different from the past.

Wang Baoshan: From the first stage, I discovered that Zheng Kaimu's physical condition is very different from last year. His body is heavy, and his stamina and strength are also poor. So in the second half of the Suzhou game, I took the initiative to remove him and change him from training. Because Zheng Kaimu is a very important member for us, he has changed a lot through the adjustment of more than 20 days.

Wang Baoshan: I know Suarez well. When I was in Renhe four years ago, I wanted to introduce him. Although I didn't make a trip, I know his characteristics very well. TEDA currently lacks this link in offense. His joining and his performance play a very important role in our team's offense, including the support of the frontcourt.

Regarding Jiang Shenglong, we don’t have any age-restricted internal aid and U23 quotas this year, so we can only introduce U21 players. When we were in Suzhou, we started looking for such players. It just so happens that Jiang Shenglong is more suitable. Although he is relatively young, he performed very well and very well in the face of the pressure of the knockout. Especially since we learned that he is a very motivated player and his mental quality is also very good.

Wang Baoshan: He told me that he is very grateful to this team. After coming to the team, it feels like a family here. TEDA is a very combative, cohesive team, and very warm. I hope his father can recover as soon as possible, and he can return to the team as soon as possible. I hope we will continue to work hard in the next games.

Wang Baoshan: Through training and communication with players during this period, I told them that if a team wants to get out of adversity, it needs many, many factors, but in summary, there is one commonality that is unity and desire. I think at this point, everyone will do better.

Wang Baoshan: Yes, this is a necessary condition.

Wang Baoshan: I am also looking forward to the FA Cup match.

Wang Baoshan: Thank them for giving the team a lot of support and encouragement when the team was in difficulty. Although the team's first stage of the game made them very angry and dissatisfied, they continued to support us in the second stage. Especially before we set off, during our training in Tianjin during the November holiday, many people gave up rest to watch our training and cheer for the team. Including these two games, many fans came to cheer for the team, thank them, and hope that they can continue to support the team. (Jinyun News reporter Liu Xin)